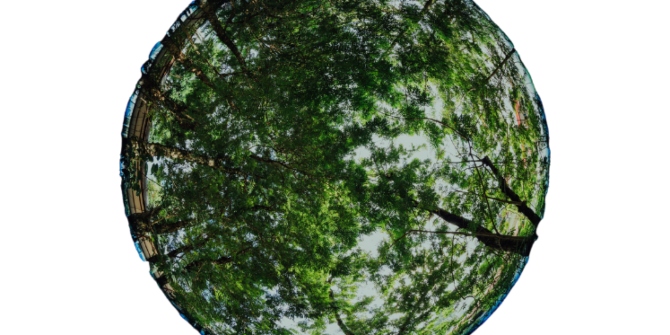 Book Review: Half-Earth Socialism: A Plan to Save the Future from Extinction, Climate Change and Pandemics by Drew Pendergrass and Troy Vettese

In Half-Earth Socialism: A Plan to Save the Future from Extinction, Climate Change, and the Pandemics, Drew Pendergrass and Troy Vettese define a vision of how we can avoid a dystopian future by stabilizing the environment and simultaneously working towards a just society. The book reorients the dominant values, priorities and politics of current environmental approaches that have been fueled by capitalist thinking, writing Hema Vaishnavi Ale.

Half-Earth Socialism: A Plan to Save the Future from Extinction, Climate Change, and Pandemics. Drew Pendergrass and Troy Vettese. Back. 2022.

Solar geoengineering experiments, with the aim of generating a global cooling effect, are now being funded by billionaires such as Bill Gates. A range of scientists warn against pushing such experiments because we don’t yet know and understand the disaster such measures could cause when rolled out at scale.

Half-Earth Socialism: A Plan to Save the Future from Extinction, Climate Change, and Pandemics, written by Drew Pendergrass and Troy Vettese, begins by painting a dystopian future set in 2047, where solar radiation management is used to control global warming. The costs of this geoengineering technology are catching up quickly in the form of disruptions to global weather systems and irreversible carbon lockouts that prevent the transition to low-carbon alternatives.

Coming from a utopian tradition, Half-earth socialism is a thought experiment for the decades leading up to 2047, revealing the inadequacy of current currents of environmentalism based on the externalization of politics to the market. The concept of “half-Earth” is borrowed from the entomologist EO Wilson, whose research showed the need to rewild half the planet to stem the loss of biodiversity. Half-earth socialism advances this concept. The book describes how various measures pushed by the market and its “high priests” – the neoliberals – will fail to prevent a global ecocide by the middle of the century, which marks the centenary of the birth of their movement and its intellectual hegemony, later political and economic. .

While the book exposes the inevitable dystopian future we face as a result of current global measures to combat climate change, the authors also highlight the possibilities of avoiding this. Half-earth socialism firmly maintains that despite the deteriorated state of the biosphere, there is still time to reverse its decline and work towards creating a just society.

The first chapter lays the philosophical foundations of a new eco-socialism based on the unknowability of nature, tracing the texts that have shaped the epistemological frameworks of current environmental thought. The authors discuss key texts from GWF Hegel (The spirit of Christianity and its destiny), Thomas Malthus (Population principle) and Edward Jenner (Investigation of the causes and effects of smallpox) to highlight their contribution: namely, “Hegel’s Prometheanism; Malthusianism; and Jennerite’s ecological skepticism”. Hegel’s text is used to establish how the humanization of nature passes through the process of work; Malthus’ influence on the economy, demography and ecology of populations is illustrated; and through Jenner’s text, the notion that diseases are the result of an unnatural domination of animals by humans is established. Together, these three texts “represent discrete epistemologies based on what can be known and controlled: nature, demography or economics”.

The authors describe the pitfalls of the humanization of nature and the structuring of society at the origin of the current environmental crises. They emphasize the need for epistemic humility to deal with phenomena as complex as climate change. The second chapter takes up the principle developed in the first: the authors plan to link “food, territory, ecology and politics in the same framework of analysis”. Through a critique of the solutions offered by the current regime, which the authors call half-utopias – including bioenergy carbon capture and sequestration (BECCS), nuclear power and the colonial “half-earth” of Wilson – the chapter outlines the goals of half-earth socialism, which are rooted in preventing the sixth extinction, practicing “natural geoengineering”, and creating a fully renewable energy system.

The authors devote an entire chapter to planning, apprehending the material objectives as well as the possibility of organizing production and consumption without the market. They draw on influences such as Soviet cybernetics and mathematics, the Chilean “Cybersyn” program, meteorology, and Integrated Assessment Models (IAM) to offer alternative schemes rooted in democracy and central planning.

In the final chapter – a page of potential utopian socialist fiction – the authors engage in the daily life of half-earth socialism. The chapter imagines and constructs a neighborhood in the half-earth socialist society, set in the year 2047, where the authors examine what life would be like without the threat of unemployment, how central planning and local decision-making are possible, the possibility of rewilding while cohabiting with wildlife and economic coordination without a market in place.

The authors critically engage with neoliberalism and dedicate part of the book to demystifying current environmental solutions such as nuclear power, geoengineering, green growth, and carbon capture storage. The book uses this critique to call for a theoretical and organizational revision of left and environmental movements to confront neoliberals. However, there is a lack of rigorous theoretical engagement with both the fundamental aspects of capitalism and the ideas advanced by ecosocialism. Although the authors cite the Período Especial de Cuba in the 1990s as having a close resemblance to half-earth socialism, their interpretation seems confined to the period of the Cuban revolution. This argument inspires much-needed discussion of the Cuba voyage, its circumstances, issues of scale, social relations, and feasibility that go well beyond the focus of the book. Proposing the Cuba voyage as a normative path of ecosocialism for other countries seems difficult to visualize if one were to follow Haldane’s principle “On Being the Right Size”, which challenges the ways of converting large economies and countries to socialism.

Despite its analysis drawing on early 20th-century polymath Otto Neurath’s idea of ​​pseudo-rationality, which rejects utilitarian pleasure, energy, and labor time, the book nevertheless offers central planning and programming as foundation of a semi-terrestrial socialist society. This contradicts their rejection of the foundations of current capitalist society in pseudo-rationality, even as the authors emphasize that the crux of the problem of deploying linear programming is not simply mathematical but epistemological.

The authors make a strong case for agreeing on the details of what utopia might look like, agreeing that speculation is a vital political act. Yet even as they attempt to critique Wilson’s “half-earth” for its colonial structure, the book’s lack of scope to discuss its demographic and geographic attributes does not allow us to address our historical reality of unequal responsibility. . Although the details are not essential for considering utopias, the book leaves plenty of room to question the fundamental idea of ​​state control, the network of bureaucracy and the bureaucracy that currently dictates inequality. and marginalization.

The idea of ​​half-earth socialism is still rooted in a productionist framework, promoting its underlying universalization agenda through an eco-socialist structure. Such a privilege of the global makes the local absent and banal for building a utopian society. This utopian thought experiment left no room for the future imaginaries of Southern and Indigenous societies. One wonders to whom is the socialism of the half-earth addressed?

The book seeks to reorient the dominant values, priorities and politics of current environmental approaches that have been fueled by capitalist thinking and it serves as a guide to utopian thought experiments. What Half-earth socialism revives the utopian socialist tradition which, according to the authors, has been marginalized by the “scientific socialism” of Marxism. By reviving this tradition, the reader wonders about the details, the scope, the relevance and, above all, the notions of justice embedded in half-earth socialism.

Note: This article gives the author’s point of view, not the position of the USAPP – American Politics and Policy, nor of the London School of Economics.

2022-06-05
Previous Post: The Weekly Authority: 📱 Pixel Prototype
Next Post: Martin Lewis urges everyone on Universal Credit or Benefits to get a £1,200 savings bonus