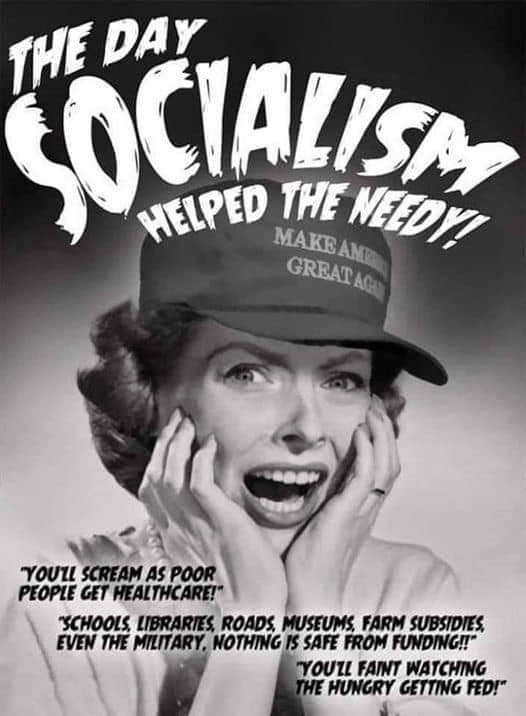 Don’t run away from socialism, embrace it!

The biggest, most common attack launched by the GOP is that Democrats are socialists and embrace socialism and all its evils. This has been a very effective strategy because it does not distinguish between democratic socialism as practiced by virtually all western democracies and communist socialism as represented by Cuba and China and the former USSR.

So. indeed, when people hear the word socialist, they think communist.

You can’t win by saying you’re not a socialist because if you support half of the things most Americans support, you’re actually a socialist. So embrace it and don’t run away from it, but rather try to define it clearly.

Many Hispanics who have fled Cuba, or other socialist dictatorships like Nicaragua, do not differentiate between democratic socialism and communist socialism. This is why many Hispanics support the GOP. They consider democrats to support communism because they confuse it with socialism.

So how to attack this messenger. Explain that democratic socialism supports free and fair elections and is not based on an authoritarian ruler. It is not anti-capitalist because most western democratic socialist countries have a very healthy business sector.

Instead, insist that all the things people in this country take for granted are based on socialist systems.

The free interstate highways we drive on are free because the government subsidizes them. Would we rather pay tolls to drive on all highways so businesses can take advantage?

The public schools we take for granted are socialist. Or would they rather have a whole system of private schools that only the wealthy can afford to send their children to and whose main purpose is to return money to shareholders rather than to educate children.

Do we want all health care research to be based on the cost-effectiveness of the discoveries that come from that research?

Do we want to continue to receive retirement payments from SOCIAL SECURITY and have our medical expenses covered by MEDICARE or should we leave that to for-profit insurance companies and investment firms?

Do we want an army paid and accountable to our government and our elected officials or an army under the control of a corporate oligarch who will make decisions based on profitability rather than decency?

Do we want the air we breathe and the water we drink regulated by corporations with a financial incentive to dump toxins into the air and our rivers, lakes and oceans?

Do we want guarantees that our money is safe when we deposit it in the bank or should we allow banks to charge us exorbitant fees without any regulation?

These are just a few examples where socialism has saved this country and how it is practiced in most civilized democracies around the world.

So don’t try to pretend you’re not a socialist. Instead, take the time and effort to explain socialist policies and why they benefit 95% of Americans. The 95% of us who lack the ability to pay for private schools, access to the best health care, access to top-notch financial advisors and lawyers.

Emphasize that it is not socialism that is responsible for soaring gas prices, but rather unfettered capitalism that places no restrictions on how much companies can charge.

Democrats should come to terms with the GOP attacks by explaining why most things people need and want are actually socialist and that by supporting the GOP they are saying corporations and the wealthy will continue to control our government and our welfare. – be economical.

2022-04-17
Previous Post: Why Tax Refund Loans Are Bad: Fees, Interest, and Risk
Next Post: Extinction Rebellion is wrong – capitalism is not responsible for climate change