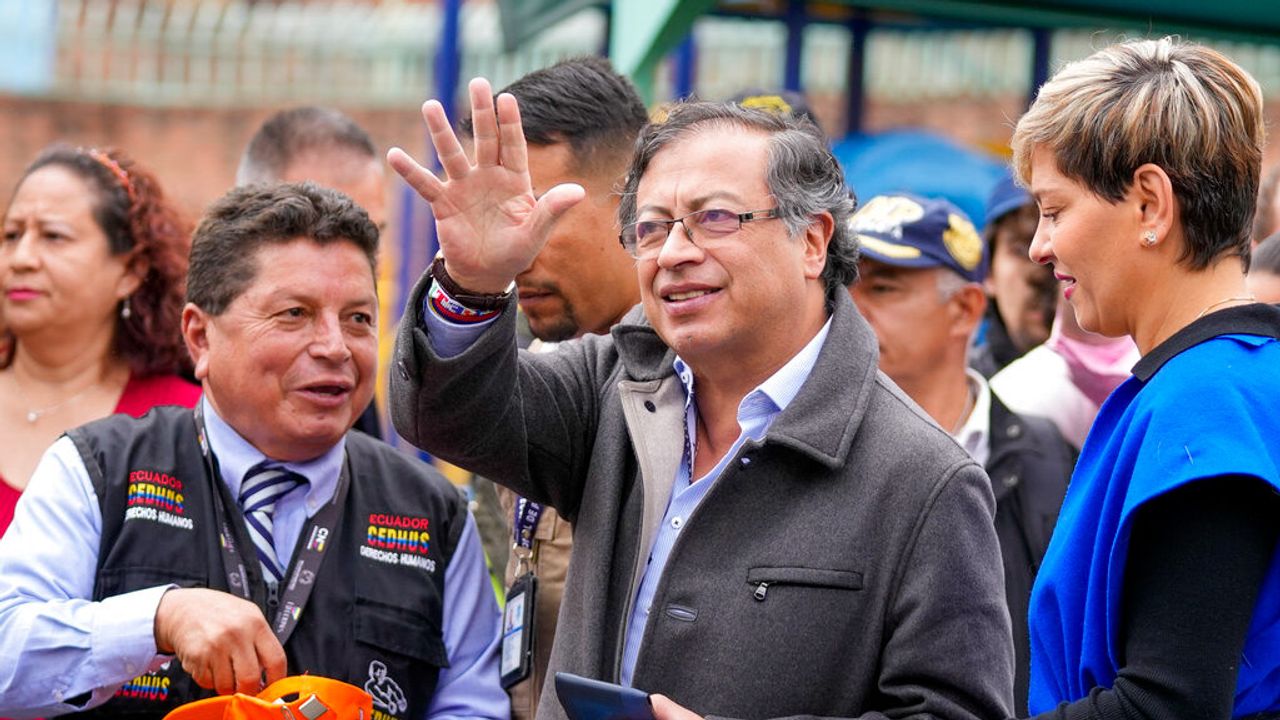 President-elect of the pseudo-left Gustavo Petro: “We will develop capitalism in Colombia”

Gustavo Petro, candidate of the pseudo-left coalition Pacto Histórico (Historical Pact), was elected president of Colombia last Sunday. With 50.44% of the vote, he beat the fascist candidate Rodolfo Hernandéz, nicknamed the “Colombian Trump”, who obtained 47.04%. The result was heralded as the first victory for a “left-wing government” in Colombian history.

The election of Petro and his Vice President Francia Márquez has been heralded as the latest achievement in a new wave of the so-called “pink tide” in Latin America. Everyone who identifies with this trend celebrated the event, including Mexican Andrés Manuel López Obrador, Argentinian Alberto Fernández, Bolivian Luis Arce, Peruvian Pedro Castillo and Chilean Gabriel Boric. Former Brazilian President Lula da Silva, who intends to take over the presidency in Brazil’s October elections, said that “[Petro’s] victory strengthens democracy and progressive forces in Latin America.

Petro will take control of a country going through the deepest economic, social and political crisis. The current far-right president, Iván Duque, is leaving his seat as one of the most hated leaders in Colombian history, with a disapproval rating above 70%. His government was marked by successive national strikes and massive protests that challenged the terrible levels of social inequality and the deadly violence of the Colombian state.

The COVID-19 pandemic has represented a drastic worsening of social conditions in Colombia. The country had one of the highest COVID death rates in the region, with 140,000 deaths, according to official data. During the same period, 3.6 million Colombians have been pushed into poverty, with unemployment reaching a record high in 2021.

Social opposition in the streets, driven by these conditions, was brutally suppressed by the Duque government. More than 80 people were murdered during the Paro National [protests]of 2021, according to a survey by the Institute for Development and Peace Studies (INDEPAZ). These deaths were directly perpetrated by police and military personnel, who also collaborated with and aided civilian elements in committing killings and other acts of violence against protesters.

The Colombian state apparatus of violence, funded by US imperialism under the guise of the war on drugs, has been exposed to the eyes of millions as a class war machine directed against youth and the working class. in trouble.

Petro’s election is a distorted reflection of this mass experience and rejection of the Colombian bourgeois regime. National strikes were diverted by the National Committee at its direction from direct confrontation with the Duque government and the capitalist system. Instead, the trade union federations, student and peasant organizations at the head of the Committee promised an electoral solution through the candidacy of the Historic Pact.

Along with Petro’s campaign, a former member of the 1980s guerrilla group M-19, sought to channel the feelings of the masses behind abstract slogans like “defense of life” and “politics of love”. , it was evolving more and more to the right in search of a “national agreement” to save the Colombian capitalist system in crisis.

In his final week of campaigning, Petro published an open letter to “Colombia’s soldiers and police.” He proclaimed that one of the central points of his governmental program is “the strengthening of the public force and the well-being of its members…to achieve total peace in the national territory”.

This nod to repressive forces was interpreted in the media as a response to the opposition and public military attacks on Petro, which were never contested by the candidate. The most notable of these came from army command Eduardo Zapateiro, who tweeted threats and accused Petro of being corrupt and demanding his respect for the army.

The president-elect’s speech at the Movistar Arena in Bogotá only confirmed that Colombia’s “first left-wing government” will in fact be more right-wing in character. At the climax of his speech, Petro responded to the “campaign of lies” that claimed his government would “destroy private property,” announcing, “We are going to develop capitalism in Colombia. Not because we like it, but because we have to overcome pre-modernity in Colombia first.

Petro’s reactionary rhetoric reinforces what had already been demonstrated by his peers in the region, from Fernández in Argentina to the newly elected Boric in Chile. in times of crisis for Latin America’s commodity-based economies, their new “left” leaders openly take on the task of deepening capitalist adjustment policies and intensifying repression against growing social opposition. more explosive.

In his assurances of preserving private property and remaining within the framework of capitalism, Petro openly seeks to distance himself from figures like Hugo Chávez, who have haunted him throughout the campaign. The late Venezuelan president, the most emblematic leader of the “pink tide” of Latin American origin, sought to conceal the bourgeois nationalist character of his government with policies of limited expropriation and the promise of a “socialism of the 21st century”.

At the same time, in his assertion that Colombia must overcome “pre-modern”, “feudal” and “slavery” vestiges, Petro seeks to revive the bankrupt justifications used by Stalinism for its support of bourgeois regimes in America. Latin. and other economically backward countries. Stalin’s theory of two-stage revolution (preaching that a bourgeois-capitalist stage must precede socialist revolution in backward countries) served to disarm the Latin American proletariat in successive pre-revolutionary situations throughout the 20th century. , paving the way for bloody military dictatorships.

This argument by Petro is a nefarious attempt to disorient the Colombian working class and youth. Social inequality, bloody state repression, the murderous policy of herd immunity in response to the pandemic, and the environmental crisis facing the Colombian masses are not expressions of “pre-capitalist” vestiges. They are rather the direct products of the domination of society by the capitalist profit system, which proves that it is urgent to abolish it.

It remains unclear how the new Colombian government will develop its relations with the United States, which has its main strategic base in Latin America in Colombia. Shortly after his victory speech, Petro spoke on the phone with US Secretary of State Antony Blinken. Blinken then tweeted, “We discussed the longstanding partnership between the United States and Colombia and how we can work together to improve inclusive economic prosperity, fight climate change, and further deepen our relationship.

Harassed by the explosive crisis of global capitalism, the constant threat of intervention by US imperialism, and in its quest to maintain a “grand deal” with the national bourgeoisie, the Petro government is on a collision course with the Colombian working masses. . Not only will he and his historic Covenant be quickly exposed, but also the corporate unions and pseudo-left middle class organizations that promoted them.

Among the latter are the Colombian Morenoites of the Socialist Workers Party (PST), a member of the IWL-FI. Hypocritically declaring that its vote for Petro was “critical,” the PST for years harbored illusions about the progressive character of a historic Pact government. This time, they have fervently promoted Francia Márquez since she ran in the Pact primaries. Based on the fact that she is a black woman and social activist, the PST said: “We recognize in France the personification of the need for change felt by millions of Colombians who have protested against the Duque government and Uribisme since November 2019”.

This view of Márquez is shared by broad sections of the Latin American and global pseudo-left. An article published in the Latin American edition of Jacobin affirmed that “Márquez, in addition to embodying the qualities of the women of the Colombian people, as well as the resistance to the various racist, classist and misogynist oppressions suffered by the vast majority, has managed to articulate an emancipatory discourse that embraces all popular struggles , all the excluded and oppressed people of our people, obtaining that, in his face, we can see ourselves reflected, the “nothings at all”.

Despite the pseudo-radical slogans against structural racism and machismo, the Vice President’s “emancipatory speech” offers no confrontation with capitalism and imperialism. On the contrary, as she claims on her website, Márquez has been working since 2020 to implement programs in Colombia funded by USAID, a US government agency linked to the CIA.

The development of a truly socialist politics in Colombia and throughout Latin America requires the construction of a revolutionary leadership that fights for the political independence of the working class and its unification across borders under the program of the international socialist revolution. This means building a Colombian section of the International Committee of the Fourth International (ICFI).

Review of the WSWS

What is the pseudo-left?

This review examines the response of pseudo-left political tendencies internationally to major global political events of the past decade.

2022-06-23
Previous Post: How online repayable loans can be beneficial
Next Post: PleaseLoan eliminates endless loan lines with its online platform that makes the borrowing process easier